Changing the Game With Agrivoltaics

A few years ago, DOE’s NREL studied the possible benefits of ground mounted solar panels over active agricultural land.  The aim was to see if this could be an answer to several different problems & obstacles for both industries: agricultural soil moisture loss, the need for scaled sustainable regenerative farming practices, and PV area placement availability.  Specifically, the study aimed to see if a co-location of agricultural crops and photovoltaic systems would be mutually beneficial in soil water retention and heat reduction  At the time, growing plants and crops underneath solar arrays had been done, but only sparsely.  In 2012, only about 5 MW of solar had been built over vegetation in the U.S.  In Septembers of 2019 NREL published “Agrivoltaics provide mutual benefits across the food–energy–water nexus in drylands” in Nature Sustainability which illustrated their conclusion that there were benefits in all categories for both the agricultural uses and solar production.

The study was conducted by planting a variety of different crops typically grown in a range of temperate climates and monitoring how they fared under open-sky conditions (the control group) against the crops planted under the partial shade of the PV array (the test group).  The crops used were chiltepin pepper, jalapeño, and cherry tomato.  (I’m assuming they made salsa afterwards).  Here is some of what they found:

Additionally, with vegetation under the panels as opposed to gravel, the array was on average about 9 degrees cooler, allowing for better energy production.
There is a widely-held belief that more sun = hotter panels= more solar production, right?  Not the case.  When panels are tested for efficiency & power capabilities, Standard Test Conditions (STC) is actually 25°C or 77°F as seen here on a sample First Solar Series 6 specification sheet:

Solar Racking for Every Type of Commercial Rooftop

Since the study, “agrivoltaics” have caught on quickly with installations as well as experimentation and study programs in universities.  Oregon State University has a section dedicated to Agrivoltaics on their website within the College of Agricultural Sciences section.  They define agrivoltaics as “a symbiotic relationship where both the solar panels and the crops benefit because they help each other perform better.”  The university intuitively points out that modern civilization requires energy, water and agriculture in order to thrive.  Technological advancements have been made in the improved procurement, treatment and usage of these elements separately but agrivoltaics address all three of them at once.  A study conducted by OSU concluded that by converting just 1% of U.S. farmland to agrivoltaics, we could meet our current renewable energy targets while saving water and enabling more sustainable food production.  [The biggest inhibitor to an ambition like this would be in ensuring that planned installations were done within feasible parameters of transmission line infrastructure.]  But 1% seems like a worthy and doable goal.

The initial funding allocation is $8 million, and DOE is looking to award 4-6 projects, each in the $1-2 million allocation range.

One notable agrivoltaic system already up & running (not a part of this new FARMS program) is Jack’s Solar Garden, a 1.2 MW community solar project located in Boulder, Colorado.  As of February 2022, forty different types of plants & crops were being planted underneath the array as well as pollinator-friendly shrubs and trees surrounding the project.

And it’s not just water conservation in soil that the U.S. has started to scale.  The Turlock Irrigation District in California is beginning a new pilot program to build solar canopies over canals to conserve water & provide ample installation area for the multiple gigawatts of energy they plan on producing from the project.  If successful, California will likely expand this solar-canal coverage model.  Estimates show that if solar is installed on all 4,000 miles of the state’s public water canals, they could save over 60 billion gallons of water per year while generating 13 gigawatts of energy (that’s enough to power over 700,000 homes).

Things aren’t just moving in the U.S.  In France Sun’Agri, in partnership with the local agricultural chamber, installed a small viticultural agrivoltaic system in Piolenc, in Hérault- an area the southern part of the country.  “Viticultural” means the cultivation of wine grapes (I had to look it up).  The system is designed on trackers that move with sunshine needs & weather conditions in order to optimize the production results of the fruit growing under the panels, protecting them from heavy precipitation and enabling a limit to the light saturation.  The water conservation has been successful with a 20-30% reduction.  With these successful results, this initial pilot installation is expected to expand this year.

It will be interesting to see just how fast agrivoltaics can scale globally, but glad to see how fast this application took off.  Honestly though, we’ve already got an increase in production for vegetables & wine.  What else do you really need?

A Comparison of Trina, Phono and Mission commercial solar panels 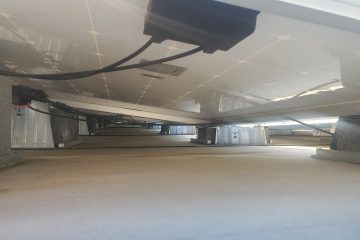 Solar Racking for Every Type of Commercial Rooftop

How do rooftop solar arrays stay secure on commercial buildings without damaging the roof membrane? Find out here.

Major multi-national corporations have had sustainability goals in place for a while. The challenge now is supply chain compliance.